So it is summer time and my wife took our 3 kids to the library. God bless her. While she was there, she was looking at the movies and saw “Chips” with Dax Sheppard and Michael Pena. We both like comedies and the movie was free to rent so she decided to get it. We are both kids that grew up in the 80’s and watched the old Chips series so we thought this would be a good throwback movie with a few laughs. 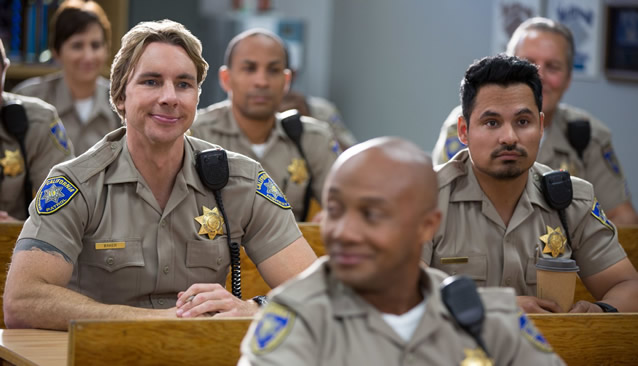 We started watching this movie on a Friday night. My wife was asleep within 20 minutes. She woke up about 30 minutes later for a few more minutes and said “I haven’t laughed once” and then fell back asleep.

I sat through about 75% of the movie before throwing in the towel and realizing that sleep was more important than finishing this movie.

I haven’t fully decided if I am going to go back and find out what happened since we have the movie for like two weeks.

The plot was pure garbage. Literally the only time I chuckled was when Ponch’s face managed to hit John’s naked genitals while he awkwardly carried him into the bath tub. Even that scene was painful to watch because the story sucked so bad.

Whoever decided it would be cool to let Dax Sheppard star in the movie while also being the writer and director needs to update their resume. I have never been a fan of him other than his supporting role in “Idiocracy” Great movie by the way!

I got a little excited when Private Pyle from Full Metal Jacket showed up as the villain but he was equally as bad as everyone else. There was no saving this movie.

Maybe if R. Lee Ermey showed up for a cameo to save the day, it would have helped. That would have been cool to see Gny. Sgt Hartman from Full Metal Jacket riding in on his motorcycle as the legendary High Patrolman that came out of retirement to help at the very end. He ghost rides his bike into Pvt Pyle as he yells “Now you are in a world of S**t”! Come to think of it, that may have happened since I have not finished the movie yet. I doubt it did.

Go pull weeds instead of watching this movie.

UPDATE : 24 hours later: I went back to finish the movie. I felt it was unfair to review the movie and I was pretty close to being done anyways. I finished the movie. It still sucked... don't bother.

TimDango Movie Reviews: My Favorite (And Least Favorite) Movies of 2018

When my Grandaddy passed away years ago, my then girlfriend and now wife, suggested a song to me....

My family and I were ready for this. It dropped on New Years Day and we finished it on New Years...
© 2022 VanDyk Mortgage Corporation All rights reserved.
HubSpot CMS Theme by Sprocket Talk